What a man you were 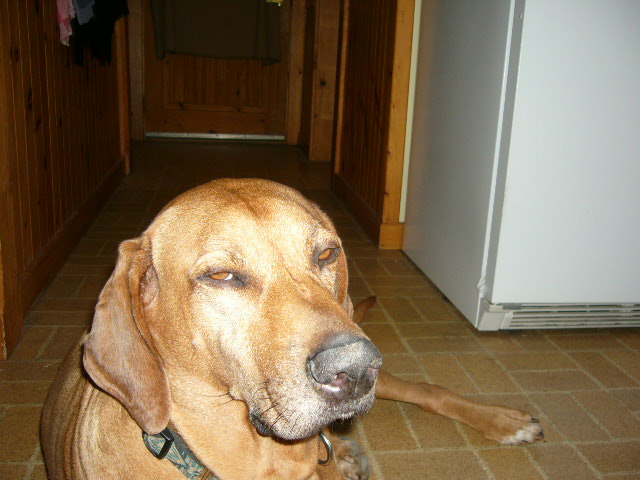 You know those little funny, cute, goofy things we all say to dogs when we love them so much and we’re focused on them day to day? Yeah – you who are reading this blog surely do. I had a few of those with my Luke…Wildewit’s African Jabulani – a few, well more like many – but some stand out, and they stand out five years after he died.

Luke was my soulmate. He was my first Ridgeback. He was a dog I made some mistakes with. He was the love of my heart for eight years(and, I will always love him, forever I will) His ashes sit on a table in my bedroom, beside a picture of his serious, focused, beautiful Ridgeback face.

On September 1, 2006, I was on top of the world, or so I thought. I was healthier than I’d been in ages, thanks to diet and exercise. I was happy living in the Gatineau Hills and focused on my work. I had two dogs, Luke and Lila. I was doing well. and that Friday was like any other day, at all, in my life.

I don’t remember all that I did, but I will never forget a few aspects.

I’d been worried about not spending enough time with my dogs, too immersed in my own pursuits (some, in retrospect, more valid than others). I had decided that Labour Day weekend would be dog-focused. On the Saturday, I’d take them to Gatineau park, and then pick up raw bones for their pleasure in the afternoon. Luke couldn’t do raw food, but I’d cook him a beef and sweet potato stew Sunday night. That weekend was, supposed to be,  all about the dogs.

Somewhere about 3 pm, I was upstairs eating one of the strawberry-yogurt Zone bars I used to live on. Luke came up and petitioned me for a bite. I gave him a piece, and he thanked me with an unusually exprssive kiss. I remain grateful to this day I gave him a bite.

He died that night at 10 pm. In the back of my Stupid Ford van, my last gift from my father. We had just pulled in to the Veterinary Emergency Clinic in Ottawa. He had been fine until about 7:45. Then he collapsed. And shortly afterwards, he died.

I remember how he sounded when he hit the floor, while I was upstairs getting ready forthe evening.

I remember thinking – he CAN’T be seriously ill, he just ate well and ran around like a puppy on his walk.

I remember the sick feeling that came over me when I checked his gums, and they were so pale.

I remember how he finally decided to just stand up and let me lead him to the van, after a half hour of trying, and me so frantic with upset.

I remember that we stopped at Island Park Drive, just five minutes before the clinic, and when I looked back at him he was sitting up and looking straight into my eyes.

I remember how brightly his eyes shone, as if he were saying goodbye. I thought, at the time, he was saying “I’m ok MOM”…but he was saying, that he was nearly dead.

He was, in fact, saying goodbye.

I remember, more than anything, opening the backdoor and finding him unconscious.

I know some people thought my devastation was excessive.  I carried on with my work and my life, I went to Walkerton to get Daniel just 7 weeks later. I’m a survivor. I wept for months, but I survived. the shock reiterated what I went through when my brother died suddenly  2 years earlier.

I struggled. And when i think about Luke sometimes I still do.

His form of lethal cancer is something I have lived through again and again with clients, friends and members of message forums. He was not alone. It was simply that, there was no sign, no warning, no way to believe that a dog this carefully reared could just collapse and die.

but, through the pain, here is what I will – always- remember.

I don’t have words, really, to say how great he was, or how much I miss him, or how painful the memories of his last hours till are. all I can do is send my love, and my deep, deep gratitude for all he taught me about diet, about epilepsy, about compassionate understanding of so-called difficult dogs – for every hour we walked this path together. Luke was a completely unique being, and I love him to this day. When I used to (abstractedly, thinking  it was a long way off) consider what I’d put on his funerary urn, I thought about that line from Hamlet, where the Prince talks about his murdered father and says “He was a man…I shall not look upon his like again”.

Luke was not a dog you could say “Good boy!” to. He was a man. I used to reward his good behaviour by saying “What a man you are!”: For which i’d be rewarded with one of those jaundiced eyed, withering Luke expressions, as if to say “UH HUH. And this should make me happy? OF COURSE I’m the man. Where’s the beef?”

I have another male RR now, the absolute glory of my days, a dog I adore to a probably psychotic degree, who despite being not only the same breed but family, could not be more different from his uncle. I have learned to deal with the short lives dogs have and to accept that even when we do our very best by them we still lose them all too soon, sometimes. And even a full lifespan is way too soon. I lost Luke on Sept 1, 2006 and went straight back for more. Danny is my heart, my soul-dog, my best friend. I will be sick in my heart when he leaves even if it is, as I fervently pray, a very long time from now.

They mean too much to let fear and pain deprive us of their company.

And today, I grieve vividly again. For my Babe. For my  beloved, funny, curmudgeonly, irreplacable  Luke. For the good times I miss, and for the sorrow when he left.

Oh – what a man you were….thank you for everything.