“The Rule of Thirds” – please break this one! 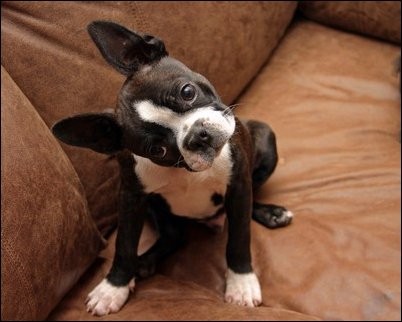 Some rules are made to be broken. This one, I want you to take a closer look at. And see what you think is best.

The Boston Terrier is one of many breeds prone to hypothyroidism; correct dietary iodine levels are essential for thyroid health, and many home made diets are low to deficient in iodine.

Something I hear a lot about from aspiring home feeders is,  “The Rule of Thirds”  as a method of portioning food in a home made diet ; it  baffles me right away for several reasons. First –  the way it’s expressed often doesn’t even utilize three nutrient groups, but rather three food groups, and sometimes it’s a mixture of food groups and nutrients. For example when I googled the term today, most of the quotes I saw referred to “1/3 protein, 1/3 starch, 1/3 veggies”….uh, makes no sense at all. .  and it’s very misleading for all the people trying to develop home made diets on their own, especially in light of the latest run of commercial food recalls.
Hence – a quick post today to share my thoughts on precision nutrition and why it matters; dividing your dog’s meal into three food groups usually ends up with a tasty meal, but one that is also lopsided and unbalanced. Once in  a while, sure, most dogs can be fine anything home cooked (within reason; too much fat of the wrong kind is always inadvisable)  For longterm use, lets look at what this “rule” is actually suggesting, and how various interpretations of it  break down nutritionally.

No – it really is not that complicated. 🙂

The Rule of Thirds goes something like, when homefeeding a cooked diet, use one third “meat” one third “grain” and one third vegetables. My first issue is, it’s far better to break the energy nutrients down in terms of calories, not volume. Volume of food is notoriously unreliable, as we shall see. Next – “vegetables” most often mean foods that contain about 50 calories a cup, on average, so the calories they contribute overall are very small…this means, when analyzed in terms of calorie content,, we’re looking at almost 50/50 grain and meat. The category “grain” worries me as well, since so many dogs have specific sensitivities – may be ok with oatmeal but not rice or vice versa -it’s simply too general. I agree that  UP TO a third of the diet on average, could come from carbs, but many dogs do better with less, most of my clients are on 15- 20% unless a health condition indicates they need more. Speaking very generally, I prefer to see sweet potato, quinoa, buckwheat (not a form of wheat!) and assorted, rotated veggies form that portion…but, rice, barley and oatmeal *can* play  a part.  And “meat”? Some sources of protein, like ground lamb and duck, are exceedingly fatty, some like haddock are so low in fat as to mandate some other fat source must be provided. Whitefish, ground lamb, turkey and chicken,beef heart, eggs are all protein sources but with dramatically different nutrient content. Proteins are not interchangeable!

So; mixing these food groups up willy nilly is one great example of why “variety” not only doesn’t work, it can be a nutritional disaster in the making.

The Miniature Schnauzer is prone to many health problems, among them pancreatitis and uroliths (bladder stones ) both of which require careful dietary scrutiny.

Let me say right here – if it the Rule of Thirds implied using  one third each fat, protein and carbohydrate – that makes better sense at least as a starting place for a healthy dog.  IT IS ALWAYS ADVISABLE TO HAVE A FULL VETERINARY CHECk INCUDING BLOODWORK BEFORE EMBARKING ON ANY DRAMATIC DIETARY CHANGE.  (Yes, I’m emphasizing that part). But – on topic here – exactly what happens when you use food groups instead of energy nutrients? Interesting things happen, not  many of them desirable. Example: let’s look at a simple recipe using these three foods:

Beef heart is superlean and an excellent source of protein, several Bvitamins, iron and selenium.I use it to augment a recipe, not as the chief protein source.

So about enough to support the needs of a dog who weighs 15 pounds and is moderately active.

What do we have = very high protein and a lot of carb,  with very low  fat. Not to mention, this recipe has more than twice the Recommended Allowance for iron, and both magnesium and phosphorus are much higher than recommended. Of course, it’s extremely deficient in calcium,  Vitamins A and D, and low in  essential fatty acids, zinc and manganese as well.

So, ok, for a day, but not a week, and definitely not a lifetime. It’s not the worst example I have by a long shot, either.

Let’s see what happens when we use duck meat instead.

An equivalent amount of duck meat brings the CALORIC total to 842, WAY more than a little fifteen pound dog should have – and look at the breakdown:

Whoa! Look at the fat content! If duck with the skin is used, we need to cut the serving size significantly down to keep fat content and calories in line.

So perhaps we think, hhmm, lets try skinless white meat turkey, that should balance a bit no?

We can help this last one along by changing it to dark meat(skinless) chicken, and then we get the best caloric breakdown yet:

But it’s a little high at 545 calories, and needs much more adjusting before it’s optimal for any length of time.

Dark meat chicken, preferably free range and organic, is a great source of protein and linoleic acid, but its low in iron, copper and zinc – so can form a part of, but not the whole protein section of a dog’s diet.
This little exercise shows why I’m  not impressed with this “rule of thirds” thing. It’s not balanced or even safe in some cases (pancreatitis can be triggered by very high fat; overfeeding minerals can accelerate kidney failure, and so on). I’m sure people post this idea with all good intentions, but for my money it’s not the way to go. Start by thinking about the rule of thirds not as a rule but a Guideline – and make those thirds protein, fat and carb, not meat, grain and veggies.

Bichon Frise have a predisposition to formation of urinary stones (uroliths). There are several types of stones that can form in the bladder, with struvite  and calcium oxalate being the most common in the Bichon. Dietary management is critical for prevention and control of uroliths.

Next time I will look at these three recipes and see what we might do to balance them. Lastly, we’ll add supplements that complete the recipes so they can be used for this busy little fifteen pound fellow we’re talking about today.

And keep those recipes tailored to YOUR dog, while providing everything we know he or she needs for long life and vibrant good health.