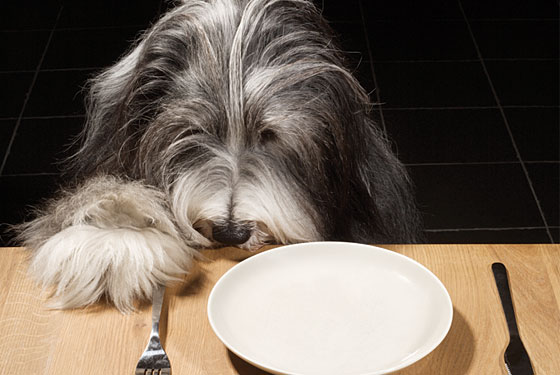 As most of my readers know, I cook for my dogs all the time, and I have for almost 20 years.  In addition, I took years of training, and I formulate recipes for other people’s dogs, often very sick ones, sometimes sick with several conditions that contradict each other in nutritional recommendations. I teach nutrition to students online. In my spare time, I research nutrition and herbs, for humans and dogs. I think it’s fair to say I’ve earned a right to an opinion on what constitutes a healthy, balanced – safe – recipe for cooked food. And in the past couple of weeks I have witnessed some of THE worst recipes I can imagine, coming out in print or e-book, from so-called professionals whose credentials I would question if they had a Phd, so bad are these offerings. Now this might sound like professional nitpicking, but  bear with me.  In one case, recently, I was approached for a consultation by a distraught owner who had been feeding several of these recipes to her 8 year old English bulldog, who (not surprisingly) loved them all. That was a good indication to my client that the recipes were ok, well that and the extreme hype and sensationalist write up on the books cover. For many people, just the fact there IS a book indicates expertise. The vet had kind of looked at the book cover, flipped through quickly and said something like  “Yeah, looks good to me”.  It turned out this dog had no real issues that a properly formulated diet for a canine,  couldn’t fix. This poor guy was eating pasta every day, more sodium than a 200 pound man should be having,  a ton of nightshades, lactose and more. He had gurgling stomach and his arthritis was much worse and he had started to itch all the time.The owner was at her wit’s end when she consulted me…surprise surprise, the dog actually loves my recipes, balanced and geared to the digestive tendencies of a canine as well as the  unique needs of this breed and individual. I wonder how long it would have been before the seriously low levels of all essential minerals and most vitamins would have taken a toll.In short, this dog was in a health crisis and facing much worse, had the owner continued to feed this bunch of popular recipes, all in the name of doing her best by her dog.

Yes, this issue is a contentious one for me.

Awhile later I found a hugely popular Facebook page wherein the owner purports to be a canine nutritionist, on the basis of the fact she feeds a raw diet and that’s what all dogs should – MUST! eat. Well, I’m not slamming raw diets here, they can and do work if they’re both well formulated and suited to the individual. I differ from the raw diet mentality insofar as I don’t believe it to be the only viable approach to feeding dogs, and I have criticisms of some aspects of prey model. my work has made it necessary I use cooked diets over and over and I see dogs living ling and superbly healthy lives on home made cooked foods. But I do use raw and I think it’s an important tool for all of us to have – raw diet can help many conditions that cooked diets don’t seem to have much effect on ( atopy, for one). But as soon as anyone proclaims that raw diet and ONLY raw diet is healthy and optimal, I tune out,. That’s not nutrition, it’s a theory, and one that is not always backed up with science or  fact. I wish I had a dollar for every person I’ve talked to who was using raw diet with great success initially, but a year or two later was seeing a different set of problems. Usually this means the raw diet filled an important therapeutic function, but was not balanced (in some cases, very deficient or excessive in specific nutrients) or the lack of fiber/high protein content was placing a strain on the digestive system(or affecting the dog in other ways). That’s when precision work can step in and make that raw diet truly optimal. It’s  not the raw diet itself that’s somehow wrong, it’s over-zealousness and lack of information that can create problems with it. It becomes much more problematic when people with no real understanding of nutrition step up and proclaim themselves “gurus” – obtain a large following – and the diets are just Godawful. I was shocked to read several e-books that offer recipes as bad or worse than the ones I saw from my client with the itchy, grumpy Bulldog. Most of these were cooked, but then the guru promotes raw-only on her page and site. You figure that one out.

In short – there’s a lot of this going around. And it has a serious impact on the health of the dogs who are fed these recipes – none of it positive.

I will be, over the coming winter, publishing an e-book series  that includes balanced, healthy recipes for dogs of various weights, starting with toy dogs and building to the big fellows. That’s how recipes should be classified – starting with weight and energy needs. But it will be a slow process, and people are asking me, every day – what should  feed? I can do consultations,  at some times, but I certainly can’t develop recipes for everyone who needs them, there simply are not enough hours in the day. What I can do is offer the e-books, and here in this entry, give you some information about what to look for in a recipe. If any of the things I need to see are missing, or if there are foods present that dogs should not be fed, don’t use the book. You’re going to the expense and effort of cooking for your dog, then make sure you are doing it correctly.

Here’s some things to watch for.

1) Calorie content. Every recipe should state the total energy content (calories) as well as feeding guidelines – does the recipe cover the whole day’s energy requirement,  for a dog of a given weight? Is it intended for a part of the day only? Say a recipe contains 500 calories – that can be half the day for a dog who needs 1000 a day, or the full day for a smaller dog. Some sort of feeding guideline should be included. For people who aren’t sure how to calculate their dog’s energy needs, a good book includes that technique, because there IS a range, dogs of the same weight who are very active obviously need more energy than older or sedentary individuals.
Stating the calorie content and how much to feed is very basic. If it’s not included, that’s a sign.

2) Nutrient breakdown: at a minimum, the recipe should state the macronutrient content. All this means is the three nutrients that provide energy – protein, fat and carbohydrate- should be stated so the owner can get an idea if a given recipe is viable for their dog or not. Most people know if their dog is sensitive to high fat, or gains weight easily on high carb – it’s a foundational indication of a trustworthy author, that this basic information is included.

3)  Statement of Balance: is this recipe fully balanced or is it intended only for special dinners here and there? If a recipe is going to be balanced and suitable for regular feeding, it will need not only the foods but specific levels of supplementation – calcium, zinc, Vitamin D – more. (depends on what is in the food itself). Simply saying things like “if you want to add a multivitamin to balance the recipe you can do so” is EGREGIOUSLY irresponsible. Which “multi”? How much for a specific dog? I just saw a recipe with three ingredients touted as viable for all dogs – “‘just adjust the amount for your dogs’ weight” – as if the owner can do that without even knowing the calorie content! and the flippant suggestion “you can add a multi”. The recipe was fine as a starting place but if fed regularly, even WITH a multi the dog would surely develop multiple serious deficiencies, starting with fatty acids, which the recipe is seriously deficient in. So a recipe you can trust either states”for occasional use only” OR it gives the specific breakdown of what you need to add. (See my blog entry https://www.thepossiblecanine.com/grain-free-cooked-recipe-for-a-50-pound-dog   for what a balanced recipe might actually look like)

4) Flippant or confused  commentary about supplements: this is really a hallmark of a recipe you cannot trust. One I recently saw – the entire e-books series stated “if you want to boost nutrient content you might want to use one of the following” and then lists several popular food supplements, such as Missing Link and Nupro – NONE of which are intended to fully balance a home made recipe at all. There were, however, several recommendations for turmeric, coconut oil and probiotics.  I was beside myself – and it would have been much better had this author stated “These recipes are not intended for fulltime use nor are they AAFCO or NRC balanced ” I could live with that. In fact, she stated the opposite – these ate “developed by a nutritionist with many years experience home feeding dogs”. Implication: they’re ok to feed fulltime.
As long as you add turmeric.
They most assuredly, absolutely, are not.   🙁

5) Terrible Ingredients masquerading as healthy.  Ok, this one gets my goat! I’ve been formulating healthy recipes that cover all nutritional needs for many years and they do NOT include tomato sauce, canola oil, SALT, peanut butter, tuna, pasta, soy sauce, cheddar cheese sauce, and ketchup!  These ingredients are all seriously NOT GOOD for your dog and not at all necessary for them to enjoy their meals. Last night I set down a bowl of local, free range chicken with a small amount of beef liver, a little sweet potato, some cauliflower and kale, fish oil and assorted supplements and watched my two Ridgebacks  demolish it with gusto. Dogs usually LOVE wholesome foods – meat, poultry, eggs, fish, steamed veggies, tripe etc – cooked or raw, without adding Parmesan cheese and Worcestershire sauce. Wheat, lactose, sodium, mercury,  nightshades – why? I feel these ingredients can be used for a special treat (though I shudder at even that, I admit, with some of them) but daily? Soya sauce?  PASTA? These ingredients are a hallmark of the Bad Recipe Book and as soon as you see this, put it back on the shelf.

6) Buzzwords – while obviously not as dangerous as the previous five, overuse of buzzwords always makes me a little suspicious. Why, exactly, is this recipe “holistic”? Make me wonder if people know what the word means. “Species-appropriate” is a term that has some value but is really only a starting point for the study of nutrition, And if it’s applied to a recipe with pasta and canola oil and tomato sauce-  you know what you’re dealing with there.
Taken altogether,you can see a trend. The Bad Recipe Book doesn’t give you clear feeding guidelines, doesn’t state the nutrient content of the recipes, is flippant with the “option” of supplements, uses undesirable foods and relies heavily on buzzwords and hype. The result might not only be a waste of your 25$ or so on the purchase, but it could cause you to spend who knows how much at the vet, as was the case with my recent Bulldog client. I realize there is no way to stop people trying to make a fast buck from the innocence of owners who want the best for their dogs, but I can do my bit here by offering some criteria and by starting the e-book series.

When it comes to the plethora of Really Bad Recipe books – let the buyer beware.

And, I hope – a little better informed after reading this entry.

Your dog’s good health might well depend on it.